New methods of hair loss treatment and prevention are constantly being developed — often coming to market making sensational claims about their success rates. While some of these newer treatments may indeed work, many are still unproven and produce mixed results.

You may wish to try some (or all!) of these treatments, especially if more established ones have not worked for you, but bear in mind they can be expensive, and may make no difference to your hair at all.

Read on for an overview of new and emerging hair loss treatments. If you would like more information on any topics raised, our expert Trichologists are always happy to discuss treatment options with our Clients.

Please contact our dedicated Clinics in London or New York to make an appointment with a Trichologist. 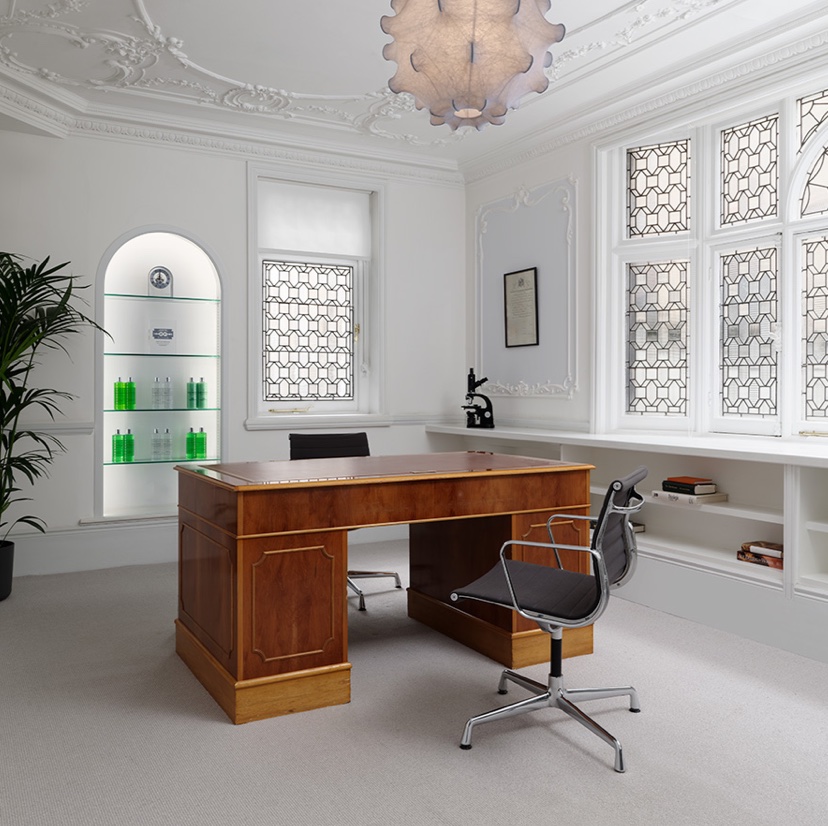 What is PRP Treatment?

Platelet-rich plasma, commonly known as PRP, has been used for several years in wound healing and skin rejuvenation, (you may have heard of its use in the ‘vampire facial’) as well as improving the appearance of scars, but its deployment as a hair loss therapy is relatively new.
A blood sample is drawn from your arm using a regular blood test-sized needle. It is then spun in a centrifuge to separate the plasma (white blood cells and platelets) from the red blood cells. The plasma is then reinjected into the dermal layer of your scalp, in areas of sparse density. The theory is that the platelets — or growth cells — contained in the plasma will stimulate hair growth.

Most commonly used for Androgenetic Alopecia (Male and Female Pattern Hair Loss), it has also been tried for Alopecia Areata, plus some forms of scarring alopecia (a type of hair loss in which hair follicles are permanently destroyed, due to an inflammatory process). It may also be used to promote faster healing following hair transplant surgery. PRP must be performed by a qualified practitioner in a clinical setting.

How is it administered?

Injections are most commonly given once a month for three months, then at longer intervals as maintenance. Multiple injections are given across the site being treated and a local anaesthetic may be administered prior to the treatment. This type of treatment tends to be expensive, which should be considered, given that periodic maintenance is usually necessary.

PRP may increase hair density and diameter, due to the high concentration of growth factors in PRP activating hair follicle stem cells. It may also hasten the transition of hair follicles from the resting to the growing phase. However, the lack of standardisation in the treatment process makes comparing results between existing studies difficult. One major benefit is that since the patient’s own blood is used, there is no risk of catching transmissible diseases.

Side effects may include: pain and temporary bleeding at the injection site, scalp tenderness, as well as swelling and itching. Treatment is contraindicated in some cases; for example, if a patient is on blood thinners, has a low platelet count, or has chronic liver disease.

PRP is expensive, and its efficacy has not yet been proven. Some people do report good results, and for Clients who have tried other forms of hair loss treatment without success, it may be a good option. Our experts are always happy to discuss treatment options with our Clients.

What is Low-Level Laser Therapy?

Low-Level Laser Therapy (LLLT) involves the use of visible light (low-level lasers) directed at your scalp, with the aim of stimulating your hair follicles (‘low-level’ refers to the low amount of energy used, in comparison to other types of laser therapy). The use of LLLT has several applications in medicine, including reduction of pain and inflammation, treating acne, and promoting tissue repair.

The lasers are sold as at-home devices, either in the form of a laser helmet worn on your head, or a laser comb that can be drawn across your scalp. The devices claim to halt hair loss, encourage hair growth, and improve hair density. Application is usually recommended three times per week for various periods of time, depending on the device, but typically between three and ten minutes.

In 2007, LLLT was FDA approved for use in treating Male Pattern Hair Loss, in the form of a laser comb, and later for Female Pattern Hair Loss in 2011. The exact mechanism of its action is not yet fully understood, but it is believed to work through metabolic stimulation of hair follicle cells, in order to increase the numbers of actively growing hair follicles. Whilst LLLT can be used as a stand-alone treatment, it would more commonly be used together with Minoxidil and/or Finasteride, where appropriate.

LLLT may increase hair density and may also shorten the resting (telogen) phase of the hair cycle, plus prolong the growing (anagen) phase. What’s more, this treatment may be suitable for patients who do not wish to take or apply medications.

This treatment is generally very well tolerated, but side effects that have been reported in a small proportion of users include: dry skin, irritation, scalp tenderness, and a warm sensation on the skin. It’s important to note that any make-up or oil on the skin, as well as thickness of the hair, may reduce efficacy and devices can be time-consuming to use.

Mircroneedling involves a ‘dermaroller’ covered with tiny, pin-sized needles being rolled across your scalp to puncture the skin in order to create ‘micro-wounds’. To heal these micro-wounds, your scalp skin will draw extra blood flow, nutrients and stem cells, and will produce extra collagen. The idea is that these elements not only heal your skin, but also stimulate and strengthen your hair follicles to encourage hair growth. Microneedling can be carried out either with an at-home dermaroller (anyone can administer this, following a short training course) or by a dermatologist.

This treatment has a number of uses in dermatology, such as improving the appearance of scars and the visible effects of skin ageing. More recently, it has been used to treat such conditions as actinic keratosis and pigmentation disorders. It is thought that the mild trauma caused to the skin may promote the formation of collagen and elastin, and help stimulate the production of growth factors. In the treatment of hair loss, microneedling is most commonly used in combination with topical treatments such as Minoxidil, rather than as a stand-alone treatment, and may help to enhance their penetration. However, further studies are needed to assess its efficacy in this way.

Microneedling can be used to help with hair shedding (Telogen Effluvium) and Alopecia Areata, but it is most commonly used in the treatment of Androgenetic Alopecia (Male and Female Pattern Hair Loss), on which most studies on microneedling have been carried out.

How is it administered?

There is no set protocol on how frequently microneedling should be administered — it varies depending on the condition being treated — but for hair loss, advised frequency tends to vary between once every one to six weeks, taking into account that the skin needs time to heal and recover between treatments.

This treatment may increase hair growth by enhancing the penetration of topical treatments, such as Minoxidil, and stimulating the production of growth factors, but it is currently unclear as to how beneficial it may be as a stand-alone treatment. While its effectiveness for treating Alopecia Areata is unknown, it is thought to reduce the likelihood of skin atrophy that can be associated with steroids injected locally for this condition. It also tends to be cost-effective.

Microneedling is generally well tolerated, but any treatment that involves breaking the skin carries a risk of infection, so devices must be thoroughly sterilised before use. For this reason, it may be best to have this treatment within a clinical setting. Possible side effects include pain, temporary redness, bleeding and irritation. Please be aware that most studies have been carried out on cases of Male Pattern Hair Loss, so its efficacy in treating females is less clear.

Microneedling has been used in skin and beauty circles for several years, and practitioners claim it helps create a firmer, more glowing complexion. Its use in hair loss treatment, however, is quite new. Some studies cite increased hair growth after 12 weeks, but as of yet there is no definitive report. If you decide to try microneedling, be careful of infection — the wounds are tiny, but both your scalp and your dermaroller must be kept clean.

Mesotherapy refers to a type of treatment in which substances are injected into the dermal layer of the skin for therapeutic benefit. A wide range of substances may be injected in this way, including plant extracts, vitamins, hormones and medications such as vasodilators. The technique was invented in the 1970s by a French doctor, Dr Michel Pistor, but it has only recently been used in the treatment of hair loss. Its other uses include in the treatment of eczema and joint pain, as well as cosmetic applications, such as the reduction of cellulite and skin ageing.

As with many treatments for hair loss, mesotherapy has mainly been used for Androgenetic Alopecia (Male and Female Pattern Hair Loss) since this is one of the most common types of hair loss. However, evidence for its efficacy remains limited.

Some studies suggest it may improve hair density, but this will obviously depend largely on what is being injected. It is also possible that any benefits seen may be attributed to the action of a needle on the scalp (as in microneedling), rather than the substance being injected.

Side effects are likely to be minimal, but may include: adverse reaction to substance being injected, skin infections, pigmentation and bruising at injection site, ulceration/scarring/deformity at injection site, and scalp abscesses. Patches of hair loss have also been reported, which may or may not resolve.

Please contact our dedicated Clinics in London or New York to make an appointment with a Trichologist.